We’ve been waiting patiently for conditions to settle down in Scotland and allow us to get on with our winter season. Apart from a day out with our client Avi, last Wednesday, we’ve been hibernating and studying the forecasts carefully.

Finally, thing seem to have settled a bit, just in time for Dan to join me for a day of winter climbing on Ben Nevis.

On Sunday, we stretched the legs with an exploration of conditions in Coire Ardair at Creag Meagaidh, wondering how well the classic ice lines on the Post Face were getting on. Things were pretty plastered in the coire, with a lot of unstable slab making getting to the base of the routes risky. Pinnacle Buttress looked in good conditions, but lines such as Last Post and South Post Direct were completely buried in powder.

On Monday, despite the ‘considerable’ avalanche forecast we headed up the Allt a Mhuilinn to the north face with the intention of climbing one of the lines on the Douglas Boulder, which we felt we could access without getting too involved with the large areas of unstable windslab that were likely to be prevalent higher up in Coire na Ciste. This plan worked well, and apart from having to make a couple of slight detours to avoid some spooky slabby slopes, we made our way up to the base of the routes.

Plan A had been the South West Ridge of the Douglas Boulder, a blockly IV 5, but access to the foot of the ridge seemed a little dodgy the closer we got, with fairly large areas of slab moving around under our feet. A quick retreat and change of plan saw us under Fawlty Towers, a III to the right of Douglas Gap West Gully. This gave two long pitches of cruddy snow, mixed with the occasional patch of nice neve and a few steep steps of tech 3/4 ice. Gear was hard to find at best so the whole route ended up being very run out. Digging for anchors for the abseil descent proved just as challenging.

All in all a great day though, most of it in amazing clear weather and blue skies. Until about 3pm anyway, when full-on Scottish winter returned with heavy snowfall and strong winds accompanying our descent.

Teams were also out on the Curtain (looked buried but had at least 2 ascents) and Ledge Route. Others headed into Coire na Ciste, only to return after encountering deep powder and unstable slopes. 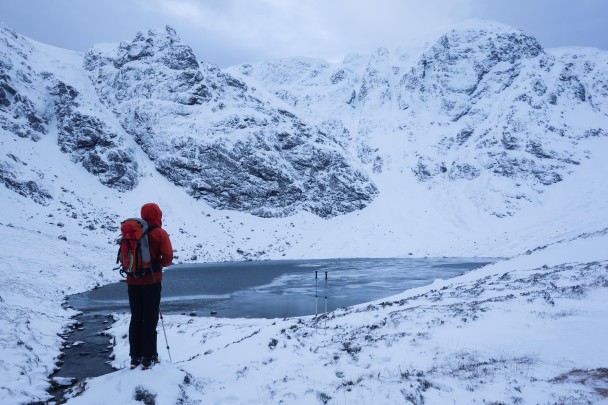 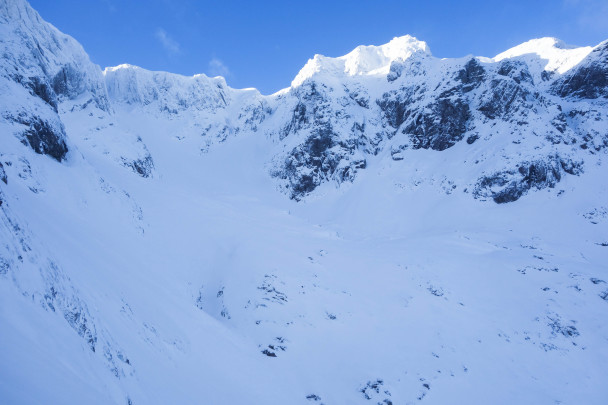 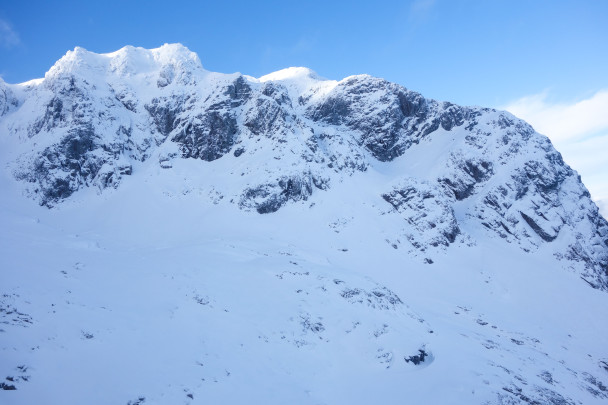 Looking over to the Curtain & Ledge Route from the Douglas Boulder